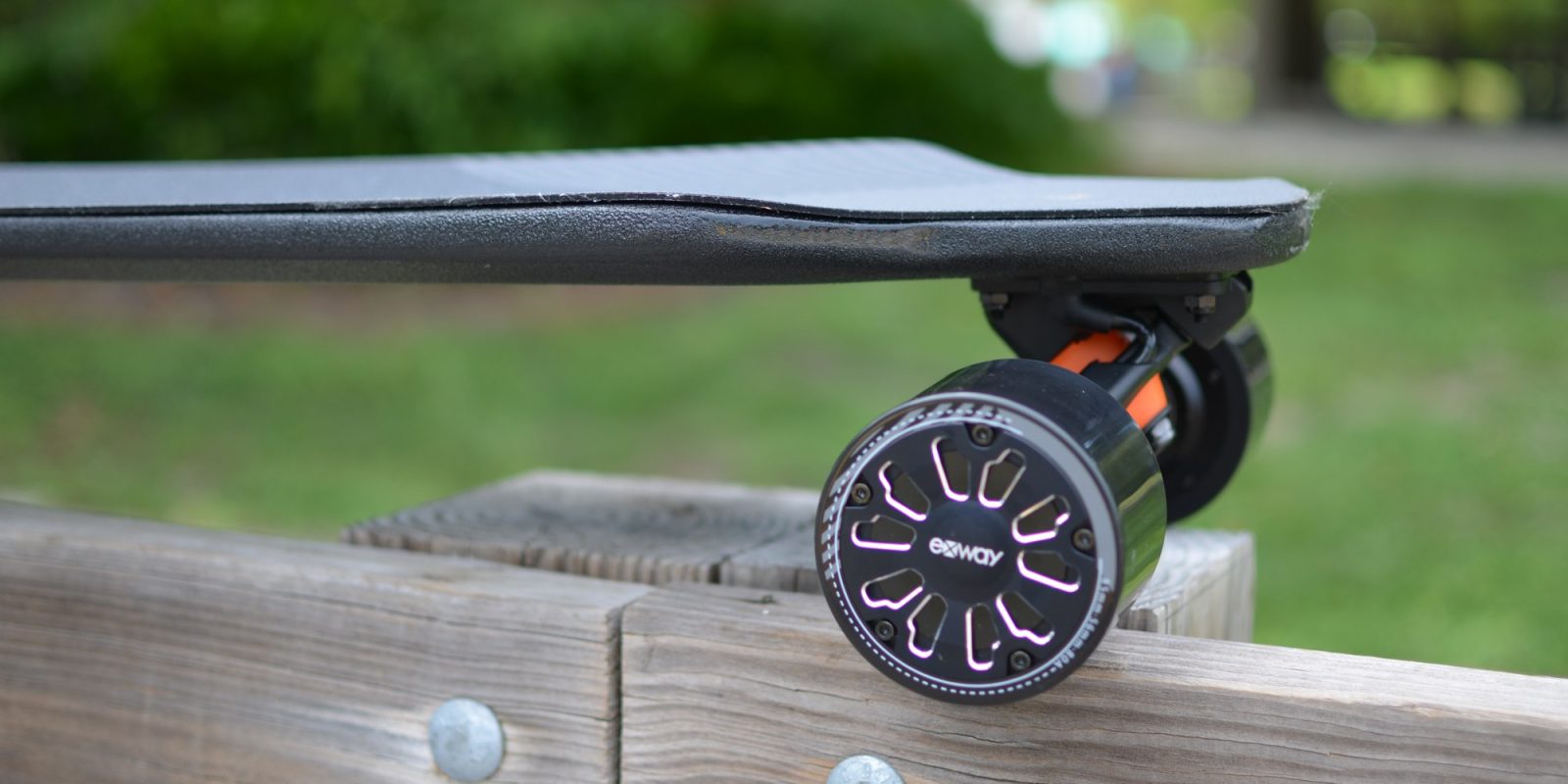 While electric skateboards may be brushed off by detractors as simple toys, you shouldn’t dismiss them so quickly. The truth is that they are actually potent commuter vehicles, as demonstrated by the Exway X1 Pro electric skateboard.

Check out our review below to see why this fast and fun electric skateboard makes such a great commuter vehicle.

Electric skateboards have a special place in the personal electric vehicle ecosystem.

We previously tested to see how they stack up against e-bikes and e-scooters for commuting and found that we achieved comparable times when slicing our way through rush hour traffic. We also found that they were a lot more fun than other methods of commuting, though their added danger has to be considered as well.

If you enjoy a more heart pumping, adrenaline rushing form of commuting, then the Exway X1 Pro electric skateboard might just be for you. Introduced as the big brother to the original, budget-oriented $599 Exway X1, the Pro version ups the ante with more battery capacity and a host of other improvements.

Check out my review video below, then read on for all of the nitty-gritty details about this awesome electric skateboard. 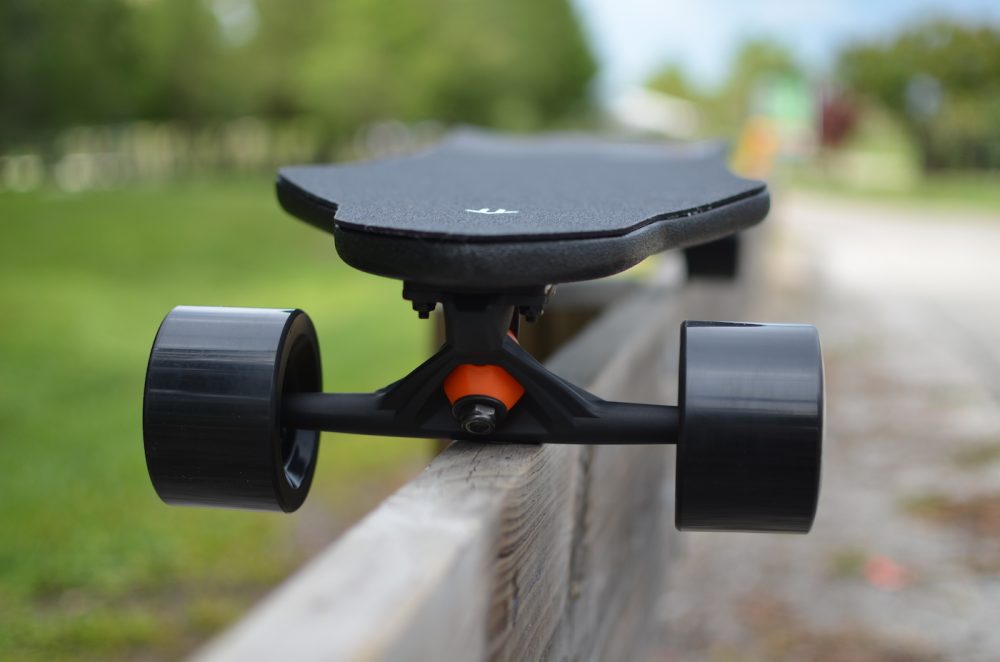 How does it ride?

So here’s the thing: Whenever I get on a new electric skateboard, it usually takes me a few days to really get used to it.

But with the Exway X1 Pro, it instantly felt natural to me. It was as if I had been riding it for months already.

There was no break-in period, no getting used to idiosyncrasies of the board, no familiarization process with the ride. It just melded with me and I felt like one with the board. I know that sounds weird, but it’s exactly what happened. Right from the beginning, the board was simply a pleasure to ride. 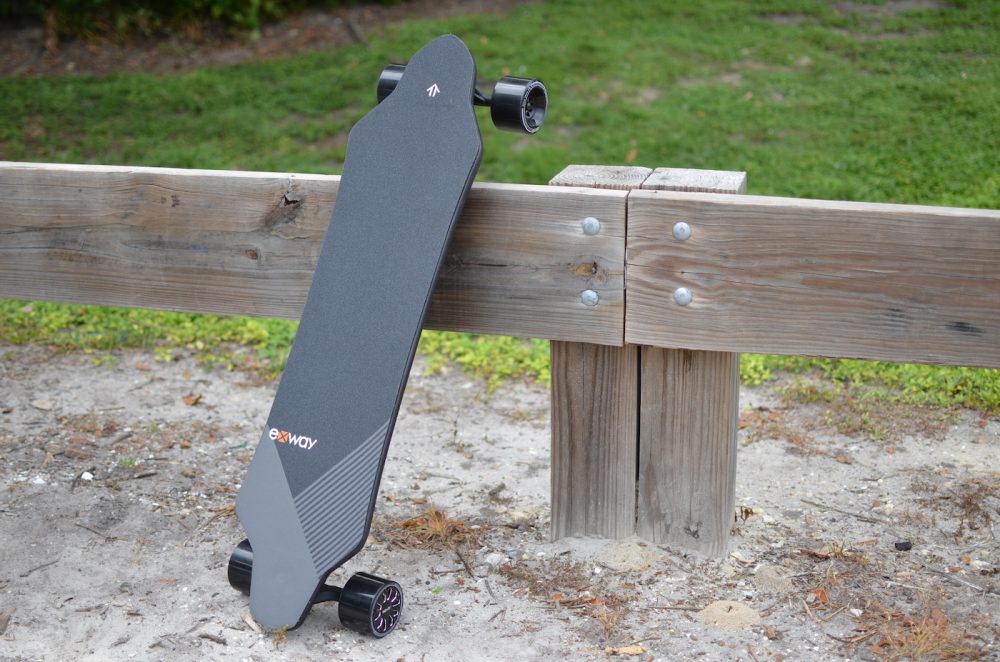 There’s an interesting little safety feature programmed into the board where it won’t go past Mode 2 (20 km/h or 12 mph) until you’ve traveled 10 km or 6 miles. That’s a bit annoying in the beginning, but it’s a great idea to force beginners to spend some time learning at slow speeds before attempting Turbo mode.

For the seasoned riders out there, just plan to do some slower laps for half an hour straight before you can really rip on this thing. 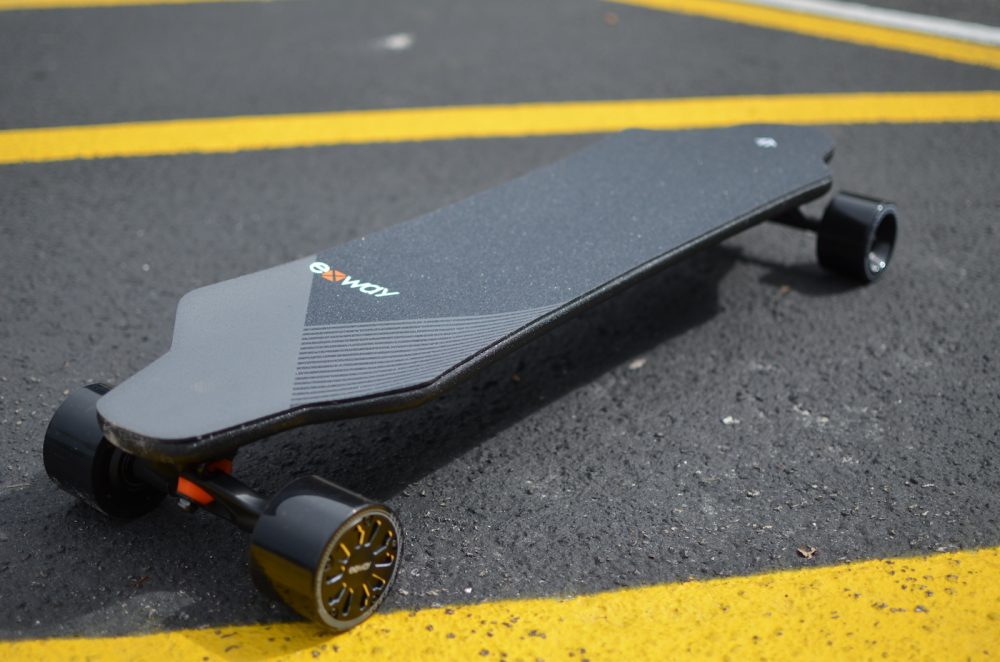 In terms of handling, the Exway X1 Pro gets top marks. The board corners and carves wonderfully yet still tracks nice and straight. The remote is responsive and quick without displaying any dead zones or cut-outs.

The Exway X1 Pro simply works great right out of the box.

The power is impressive, sure. But I wouldn’t call it mind-blowing. This isn’t a Boosted Board that is going to explode out of the gate. However, it is still quite strong and can climb hills easily.

It’s also a pleasure to carry, which is an aspect that I feel is often overlooked. I love the fact that there’s no hump on the bottom for the batteries or controller. Everything is integrated directly into the deck. That means it is both thin and uniform, two factors that make it easy to carry under your arm. 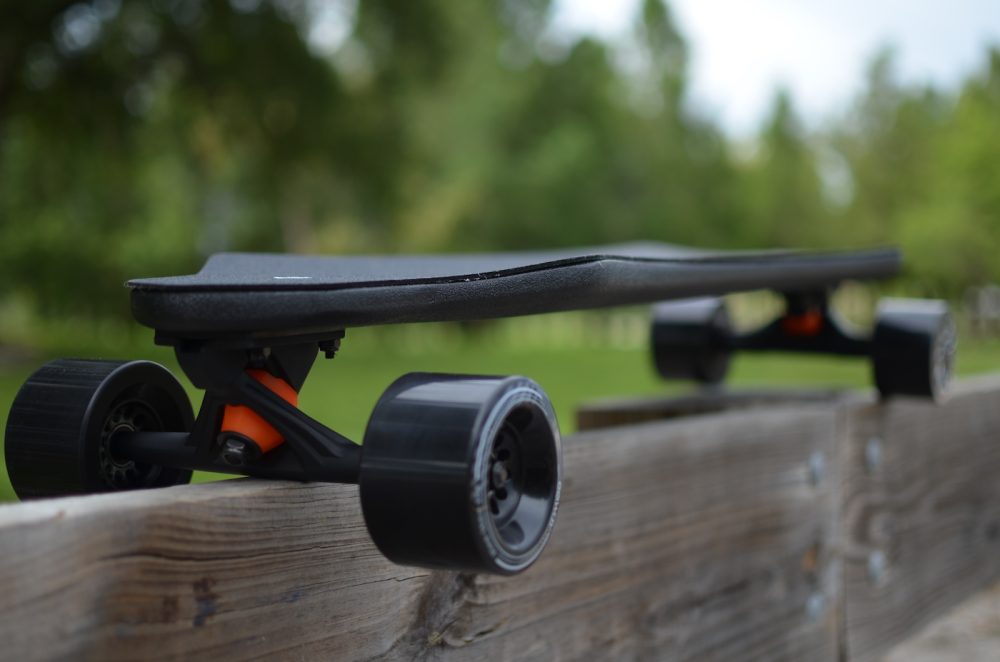 The only downside is that the deck can’t be quite as springy as other boards I’ve tried. Since the batteries and electronics are spread throughout the deck, there’s a limit to how much it can flex. And deck flex is basically your suspension on an electric skateboard.

To make up for this, the Exway X1 Pro uses grip tape that is 3mm thick foam tape, which helps absorb some bumps. It’s not quite the same as deck flex, and those foot massagers on sidewalks (i.e. the bumps for blind people) do turn into more of a Thai massage than a Swedish one. But it’s also nothing I can’t live with. If this is your first electric skateboard then it will feel plenty comfortable and you won’t even know there are smoother rides out there. If it’s not your first electric skateboard then you’ll already be accustomed to what road vibration can feel like.

While there’s not a whole lot you can do about the road vibration, you do have customization options for many other factors. Using the Exway app, you can modify settings for power, acceleration, braking, and other parameters that affect how your board rides. The app is easy to use and doesn’t crash – two things that are never a given in the esk8 world.

The Exway X1 Pro also has the coolest charger I’ve ever seen on an electric skateboard – because it’s magnetic. Just like the old MagSafe adapter on MacBooks of yesteryear, you simply get the connector close to the board’s charge port and let the magic of magnetism make the connection for you. Then when you’re done charging, yank that sucker out like you’re starting a lawnmower. (Just kidding, you’re supposed to unplug by holding the connector, but who does that!?)

A great board, but still not perfect

The only area where I found the Exway X1 Pro didn’t quite live up was in the range. It’s rated for 16 miles (25 km) but I mostly got around 10-11 miles (16-17 km) of range when riding in higher speed modes. That’s not terrible, and it’s comparable to many other electric skateboards out there. But there are also others that can go farther.

That being said, the board weighs just 16 lb (7.25 kg). If Exway added more battery then I wouldn’t be talking about how portable and easy to carry this lightweight board is.

So like all-electric vehicles, this one is a compromise. The power and speed are great, offering seasoned skaters speeds of up to 29 mph (46 km/h). The range is fairly good, though not amazing. And the handling is comfortable and confidence-inspiring.

There’s one other cool thing about the Exway X1 Pro electric skateboard. The company offers the Riot kit that allows you to swap the hub motors for even more powerful belt-drive motors. I’ll be making this swap and coming back with another review of the Riot kit soon, so make sure you watch out for that.

Until then, check out the Exway X1 Pro electric skateboard over at Exway’s website, where it is currently on sale for just $999. That’s a discount of $100 and includes free shipping and a free quick charger. Not a bad deal at all!

Or if you want to stick with the previous version, you can find the Exway X1 for $599.

And don’t forget to let me know what you think of the Exway X1 Pro electric skateboard in the comments below.